You are here: Home / Futures / FTSE Futures and Trading Example

Historically the index has been volatile reaching a high of 6950 in 1999. This high has not been touched since. 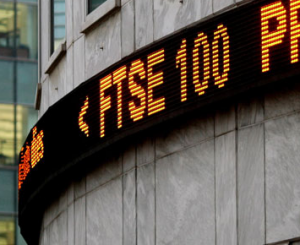 The FTSE does have the tenancy to move down very sharply in the event of unexpected fundamental events. For example as you can see from the chart below, the index dropped massively during the 9/11 tragedy. This can make FTSE trading high risk.

FTSE 100 futures are priced at a rate of 10x the value of the FTSE 100. For example if the FTSE is currently priced at 6000 points, the nominal value of a contract will be £60,000. The initial margin requirement of this contract is currently £3000. The maintenance margin is also £3,000. This would mean each index point movement would be worth £10 on any open contract.

Let’s take a look at a speculative example:

Let’s say that the FTSE 100 is currently priced at 6,000 points and Bob wishes to speculate a rise to 6,200, but due to the financing costs being included in the pricing, he does not wish to hold the position more than two months.

Let’s say that Joe has £120,000 in unit trust investments and the performance of these historically, has been highly correlated to the FTSE 100 index. In the event of a major economic disaster where stock markets are collapsing worldwide (for example the 9/11 crisis), Fred could short sell the FTSE contract to hedge his risk, if he felt the collapse would continue.

If Joe is correct and the FTSE continues to crash down to 5,000 points, his futures contract would be in £20,000 in profit. This profit should offset some, if not all the losses to his unit trust investments. This would be an effective hedge.

Joe has the option to close the contract whenever he feels is the best time.

However, if Joe is wrong and the FTSE moves up to 7,000 points, his futures contract will be £20,000 down. If he closes the contract or it expires he will have to pay this £20,000. However, his unit trust investments would probably be up by around the same amount. So he would essentially be in a “net zero” position.

The FTSE futures do not provide 100% guaranteed protection as most unit trust funds are not 100% correlated to the FTSE 100. However, there are tracker funds that do attempt to do this.