You are here: Home / Stocks / Warren Buffett : Focus On An Investment Genius

Known as the “Oracle of Omaha,” Warren Buffett is one of the most successful investors of all-time. As one of the only billionaires to acquire their wealth solely through the stock market, Buffett truly is a master of business and finance. Even in his 80’s, he continues to shine as an active investor and philanthropist. With a net worth of $37 billion, Buffett has been one of the richest men in the world for quite some time. 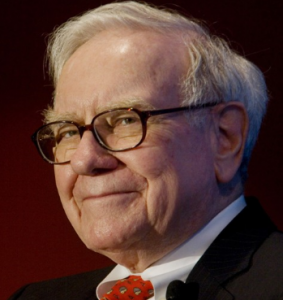 Born the son of a stock broker on August 30, 1930 in Omaha, Nebraska, Buffett was attracted to business and the stock market at an early age. Buffett displayed a keen eye for turning a profit throughout his childhood days. While other children were playing baseball, Buffet was buying six-packs of Coca-Cola for 25 cents and selling them for a nickel apiece, earning a 5 cent profit.

In high school, Buffet was drawn to stock market mogul Benjamin Graham. Buffett left the University of Nebraska during his senior year to study under the tutelage of Graham, who taught the aspiring investor how to calculate the intrinsic value of a company. This was a lesson he would never forget.

After earning a Master’s degree in Economics from Columbia, Buffett returned to Omaha to work at his father’s brokerage. Shortly thereafter, the starry eyed Buffett joined forces with his mentor by joining the Graham-Newman Corporation. However, after Graham retired two short years later in 1956, Buffett decided to return to his hometown to start an investment partnership.

Buffett spent the next 13 years consistently beating the DOW and compounding his money by 29% annually. In 1965, Buffett bought the textile firm Berkshire Hathaway located in his hometown. The purchase of National Indemnity Company and National Fire and Marine Insurance Company in 1967 marked the beginning of the terrific success story that is Berkshire Hathaway.

A famed value investor, Buffett describes his investment approach as buying stocks below their real value in order to have a significant margin of safety. The secret to Buffett’s success over the years has been his unwavering goal of never losing money on a deal.

Always well-prepared, Buffett believes in taking a calculated risk only after much research, analysis, planning, and preparation. Never one to buy tech stocks, Buffett prefers to invest in simple businesses that are easy to understand. Before investing in a company, the investment wizard does his due diligence, focusing on a company’s return on equity and forecasting the company’s growth over the next ten years.

Following sound investment tactics, Buffett prefers companies with very little debt and a high return on equity. A main principle of his over the years has been to invest in historically good companies whenever their stock drops due to a temporary problem. Using this method, Buffett has bought many companies at bargain prices. For instance, in 1976 Buffett purchased enough stock to buy himself a very high position with GEICO. The stock was previously trading at $61, but Buffett was able to purchase the stock at $2. That turned out to be one of the best buys in the history of the stock market.

As a master buy and hold investor, Buffett’s investing strategies have been copied the world over. Though he has amassed untold fortunes over the years, Buffett still lives in the same house he bought over thirty years ago for $37,500. In 2006, Buffet announced he would give away his entre fortune to charity, making him the single greatest philanthropist in the history of the country. In a day and age of obscene consumerism with millionaire hedge fund managers flaunting their wealth, Buffett is a refreshing reminder of the importance of being humble, intelligent, and taking action.